Fabulous painting by Leonardo da Vinci, Lady with an Ermine was appraised by us. Discover this fascinating story.

It took experts over a hundred years to finally attribute Lady with an Ermine to Leonardo da Vinci. 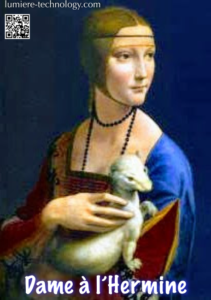 This masterpiece is a national treasure in Poland, the equivalent of Mona Lisa for the French people. Kept in the Czartoryski Museum in Kraków, the painting is only accessible to two persons: the curator and the restorer.

In September 2007, Count Adam Zamoyski, then president of the Fondation des Princes Czartoryski, authorized us to digitize Lady with an Ermine in order to launch a new scientific study, the last dating back to 1955 and 1992.

After Mona Lisa in 2004, Lady with an Ermine is the second painting by da Vinci that we have had the privilege of digitizing. Leonardo left only a dozen.
Thirteen if we count the recently discovered work on parchment, La Bella Principessa.

Having access to da Vinci’s most famous work after Mona Lisa is a privilege and proof of the Foundation’s great confidence in our know-how.

For the shooting, the table was laid bare.

It was necessary not only to extract it from its frame, but also to remove the restraint frame, a sort of additional frame which keeps the walnut plank perfectly flat.

Even the edges, usually hidden, have been made accessible for the analysis to be complete.

It is extremely rare to be able to examine this painting in such conditions. Jean Penicaut and I would like to express our warmest thanks to the Fondation des Princes Czartoryski for this privilege.

The hopes aroused by this digitization were numerous: what would we discover again about Leonardo’s technique, the original colors, the state of conservation of the panel, the restorations, the varnishes?

Were we going to be disappointed with the results? All these questions were a source of concern and impatience.

Capturing an image is only the first step in a long process of scientific analysis, sharing of knowledge with experts, light specialists, curators…

We have worked a lot, explored all the data provided by technology, analyzed thousands of images and had the joy of discovering a lot of new information, of penetrating the know-how of the great Italian master a little better.

Lady with an Ermine

Lady with an Ermine is a Leonardo da Vinci‘s painting.

The subject of the artwork

History of the realization of the painting

We can therefore date the painting, either from the years 1488-1489 before the wedding, or a little later, if we admit like Frank Zöllner that it may be a farewell gift from Ludovic Sforza to his former mistress.

Recent history of the painting

Lady with an Ermine (spectrum)

With the support of the Fondation des Princes Czartoryski, we photographed Leonardo da Vinci‘s painting, Lady with an Ermine, on September 3, 2007 in Krakow with its MultiSpectral camera.

From the information obtained through the digitization of the panel and its in-depth visual examination at the Czartoryski Museum, a virtual restoration was carried out by our team on screen.

« It is an operation whose scientific function, while being established on the basis of precise material observations, remains that of a support for reflection. »

Indeed, only cleaning tests undertaken on the work itself would allow us to consider that a real restoration would lead or not to obtain a state close or similar to that of virtual cleaning.

The first conclusions of the multispectral analyzes are as follows : 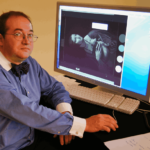 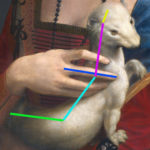 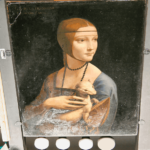 Lady with an Ermine

External links about the Lady with an Ermine