Mona Lisa has delivered her secrets

The most famous painting in the world has been explored and appraised to discover many secrets.
Leonardo da Vinci took many years to grope for the genesis of this fabulous creation.
How did we assess this work, without manipulating it and without taking samples – because of course, it was forbidden to touch it?
Here is the fabulous story of the Mona Lisa’s expertise, described elsewhere in the book of the discoverer, Pascal Cotte.

Some discoveries on the Mona Lisa 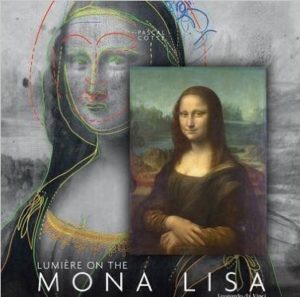 Mona Lisa scientific analysis has allowed many discoveries. And nice surprises as well.

Mona Lisa contactless scientific analysis was carried out with the JumboScan.
Jumboscan scans the painting in very high resolution and proceeds to 13 passages.
Each passage corresponds to a very specific light spectrum.
Once digitized, a big work of analysis and research begins.
The process of scientific analysis through digital processing has only just begun.

Never before has knowledge of the true colors of the Mona Lisa been so far: cutting in high resolution multispectral in thirteen measures, from UV to infrared, has made it possible to isolate the spectrum of the varnish in each pixel.

It just need then to remove digitally on each scan, the spectrum of the varnish whose curve he was able to calculate, so that a devernated Mona Lisa virtually appears, as it left Leonardo da Vinci‘s workshop.

This virtual method of lightening varnishes is an illustration whose ambition is to provide museums or public and private collections with a digitization service unique in the world.

What colors was Mona Lisa coming out of the workshop?

The Mona Lisa painting was subjected to numerous experiments, seeking to remove the mystery of the creation of this work. Canadians conclude that she had just given birth, due to the veil covering her chest, while Japanese make her speak.

But the mystery remains whole on the main question of the specialists: what color had it before the varnish yellowed it that way?

The sfumato technique used by Leonardo da Vinci makes any restoration dangerous. According to the French specialist Jacques Frank, « trying to distort Mona Lisa would risk irreparably touching the design itself, at the risk of seeing her famous smile fade, the varnish being confused with the pigments from the origin ».

Hence the advantage of being able to work on a lightening of varnishes digitally, without having to touch the original.

Mona Lisa is holding a blanket on her knees 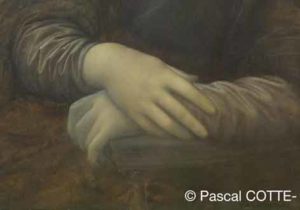 Mona Lisa is holding a blanket

Although it is on the so-called “unfinished” part of the painting, Mona Lisa would hold on his knees a pelisse whose material appears in infrared, different from his clothing, the position of the fingers which have moved would explain the position of his arm, and his hand trying to hold it back.

The Mona Lisa table has shrunk by 2.3 cm

We know Leonardo’s mathematical rigor which respected the harmonic rectangle ( the diagonal of the square included in the rectangle is equal to the height of the rectangle ) as “divine proportions” essential to the harmony of a portrait.

Due to the total absence of distortion in our optical measurement, we can imagine the original dimensions of the poplar panel.

The Mona Lisa is no exception to this rule and the painting had to be 55.5 cm wide instead of 53.2 today.
How can we explain it?

There is a stain of modern minium on the painting 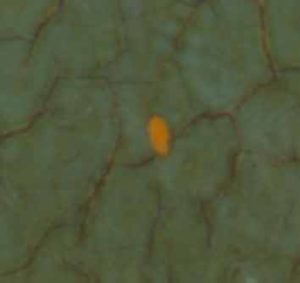 Stain of minium on the Mona Lisa painting

We discovered and identified a tiny stain of orange minium in the middle of the sky, which fills a crack.

Perhaps following a manipulation of the painting or maintenance work on the Museum hall at the time when it did not have protective glass.