The provenance of the Belle Princesse now confirmed 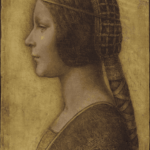 La Bella Principessa is indeed by Leonardo da Vinci and we have proven it !

The origin of La Bella Principessa profile, the drawing of three chalks by Leonardo da Vinci is formally identified. How and why its authenticity and its provenance is explained below.

Proof that La Bella Principessa is by Leonardo da Vinci

The provenance of the table has been highlighted.

History of the artwork

Cut from one of the 4 copies printed in the 1490s, the Sforziades were dedicated to the family of Duke Ludovic Sforza and his father.

Each being illuminated in a frontispiece illustrated differently according to their dedications:

The specimen from which this vellum is extracted, kept at the National Library in Warsaw, was offered on the occasion of the marriage in 1496 of the natural daughter of Ludovic Zforza, Bianca with her loyal commander, Galeazzo Sanseverino.

Leonardo da Vinci lived with the latter, especially during the preparations for Ludovic’s marriage to Béatrice d’Este, for whom he decorated the tents.

Francis I of France

This copy was then left in the collections of the King of France Francois 1er.

Then La Bella Principessa was offered in 1518 to the King of Poland Sigismund 1st Jagiellonian, for her marriage to another young Sforza, Bona Sforza.

The painting was found in the collections of one of their descendants in the Zamoÿski family, who would have cut this portrait of La Bella Principessa at the time of the restoration of the binding in the 18th century to frame it.

In 1830 descendants of the Zamoyski family emigrated to Florence, where they are buried. It was there that a Swiss restaurateur, Mr Marchig, who worked for 30 years in Florence, would have acquired it in the 1950s, and whose widow sold it for $ 21,850 at Christie’s on an erroneous attribution of “German XIXth portrait… ”

Where is the painting today ?

Today, the Sforziade from which the profile was extracted is kept at the National Library of Poland in Warsaw.

It is an amazing story, based on a rigorous investigation, through the largest libraries in Europe. It was confirmed by very eminent art historians including Professor Kemp of Trinity College Oxford, one of Leonardo’s greatest specialists, and Professor Edward Wright, professor emeritus in Art History of the University of South Florida, assisted in Poland by Miss Kazia Wosniak.

A 52-minute reportage was filmed on this subject by National Geographic and will be broadcast in early 2012.

The subject is all the more sensitive since there was an error of expertise by Christie’s in 1998, giving rise by the previous owner to proceedings against Christie’s at the New York bar, suspended in first instance for prescription of the facts…

Professor Kemp communicated the following text to us:

The portrait had been sold as “early 19th century German portrait”, “a young girl in left profile in Renaissance dress”, at Christie’s in New York on January 30, 1998. It was purchased by the new gallery Yorker Kate Ganz for $ 21,850 who sold it in 2008 at the same price to the current owner, who had the intuition that it could be an original Italian Renaissance portrait, and possibly in the hand of Leonardo da Vinci.

The main opposition came from New York experts and some observers who had missed attribution when the work was in the hands of Christie’s and then of the Ganz Gallery.

With in the background, the New York Court action against Christie’s of Jeanne Marchig, the previous owner who had entrusted her with the sale.

By knowing the original colors of the reconstructed work, we tentatively identified the portrait as that of Bianca, the illegitimate daughter of Duke Ludovic Sforza, who was legitimized and married in 1496 to Galeazzo Sanseverino, the commander of the armies Duke. She died tragically a few months after her marriage.

Given the position and specific deviation of the three sewing holes along the left margin of the parchment, Kemp and Cotte concluded that the portrait was originally fixed in a codex, probably one of the four luxurious printed copies offered at times. keys to life at the court of Sforza, at the birth of a child, or at his marriage.

On the strength of this hypothesis, confirmed thanks to art historian David Edward Wright, new research shows that the portrait was extracted from the glowing story of Francesco Sforza (the father of the duke) , the Sforziade written by Giovanni Simonetta, printed on vellum and kept at the National Library of Poland in Warsaw.

The volume was produced especially for the marriage of Bianca and Galeazzo in 1496.

On the one hand, the corresponding page was removed on a certain unknown date from the Warsaw book, probably at the time of a restoration of the binding of the codex, on the other hand, the vellum of the portrait corresponds in all points the physical characteristics of the pages.

The spacing of the binding holes in the portrait vellum correspond to those in the book. And the composition of the parchment with the vellums of the book is identical.

Technical analyzes show that the portrait of La Bella Principessa was placed after the introductory texts for the book and before the illuminated frontispiece dedicated to the one for whom it was intended.

« We can now be certain that the portrait depicts Bianca Sforza, in honor of the celebration of her marriage in 1496, and that Leonardo da Vinci was the artist:
the book being dated and the origin proven, the stylistic study shows that there is only one painter working at the court of Sforza who drew with the left hand, Leonard de Vinci. This discovery should definitively end the controversy. »

La Bella Principessa was digitized in 2008 in our laboratory. Discovered in New York, it is now considered, by specialist experts, as an original work of Leonardo da Vinci.

The details of the master painting were revealed on a large 165 cm plasma screen, from ultraviolet to infrared.

And this, with a definition of 240 million pixels, on more than 500 images cutting the pictorial surface like a mille-feuilles. This is to compare it side by side with the original, reproduced perfectly in its real colors thanks to the exceptional results of its multispectral scanning !

Some examples of digitizations are available on this website. Others, concerning Fragonard, Audubon, Latour, Renoir, Leonard de Vinci, Gericault, Rubens, Holbein, Heckel, Gauguin, “La Vie” by Picasso, “Les Paveurs” and the different versions of “La Chambre d’Arles” by Van Gogh, that of Chicago and that of Amsterdam, “Les Vieilles” & “Les Jeunes” by Goya, are already studied by their holders, in private and public collections, such as the Cleveland Museum of Art, New York Historical Society, the Palais des Beaux Arts in Lille, The Kroller Muller Museum, the Van Gogh Museum, the Fondation des Princes Czartoryski, The Chicago Art Institute, The museums of Le Havre, Rouen, Montpellier, Brussels, Le Louvre etc.

This innovation is a real revolution for the art world, providing experts with a unique tool for the study and restoration of works that until now could not be seen and assessed with such precision on photographic and scientific bases. comparable.
AFP : Reportage on the presentation of the Lady with an Ermine artwork at the Czartorisky Museum –

The vision in the visible and the invisible allows a much better knowledge of the works, offering the most advanced service to date to collectors, curators, restorers, experts, researchers and art historians, to better appreciate, study, compare , reproduce and preserve the works of art that we have a duty to pass on to future generations.

Scientific analysis pushes back the limits of the laws of optics and colorimetry concerning the fidelity of photographic measurement and the quality of reproductions of works of art, essential elements for the study and safeguarding of pictorial heritage, paintings , drawings, engravings, frescoes etc. For the greatest pleasure of art lovers, private and professional, and for a better knowledge of the History of Art.